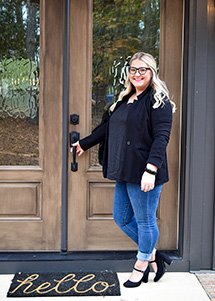 Christi has lived in the Indian Land area since 2014 and has quickly called this area ‘home” after years of traveling with her husband, Justin, a retired Army officer. Together, they have three children and a golden retriever and live in Van Wyck.

Christi received her bachelor’s degree in hospitality management from Kent State University, but quickly settled into motherhood soon after graduation. She was heavily involved in Mothers of Preschoolers International at every location they were stationed and started three new groups here in the Carolinas. She is actively involved in serving her church, FiveStones Church in Waxhaw, and also serves on the board for her children’s PTO.

While looking for land for her family, Christi quickly learned that acreage around the Waxhaw, Indian land, Van Wyck and surrounding area was a hot commodity and knew she had to start knocking on doors asking people if they would be willing to sell some of their land. Her hunt for land for their new home lasted for well over a year and led her to meet many families who shared their stories of growing up on land that has been in families for decades.

Christi now uses her experience and expertise in locating suitable future homesites as an Acquisition Agent for Farms & Estates. She holds North Carolina and South Carolina Real Estate licenses and has fallen in love with land acquisition as a career.